The Independent Electoral and Boundaries Commission (IEBC) has announced the hiring of 418,192 temporary positions before the August 9, 2022 election.

The Independent Electoral and Boundaries Commission (IEBC) is seeking qualified applicants for the following temporary positions, which will be filled during the General Election on August 9th, 2022. 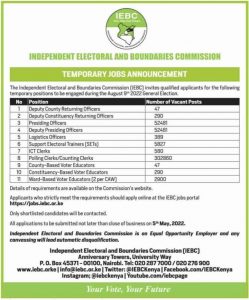 Those interested in the positions can apply by going to the IEBC job portal and filling out an application.

Part of the announcement said, “Applicants who strictly meet the conditions should apply online at the IEBC employment portal.”

The IEBC also stated that the portal will close on May 5, and that interested applicants should submit their applications as soon as possible.

The IEBC’s declaration comes just days after IEBC Chairperson Wafula Chebukati announced that over 300,000 Kenyans would be hired on a temporary basis to oversee the August 9 elections.

Man who fled after killing girlfriend in Machakos arrested